I had been expecting trouble – so when eight men, some with AK-47s, arrived at my gate in an unmarked vehicle on the morning of 20 July, I was not surprised.

One warning had come about seven weeks earlier, when the spokesman for the ruling party had called me “unscrupulous” and accused me of tarnishing the name of the president’s family.

This was after I’d publicised a Covid-19 procurement scandal involving multi-million dollar contracts awarded to buy supplies at inflated prices – the health minister was then sacked and is facing charges over the allegations.

When the state agents asked me to come out of my house, I asked to see their warrant of arrest but they didn’t show me one.

Instead they hit my dining room glass door with a gun, and walked through to my bedroom where I was waiting for them with my phone, live-streaming their entrance.

I was dragged out of my bedroom barefoot, and asked to use the same entrance where the broken glass lay strewn.

That was the beginning of my 45-day nightmare.

I was not alone, I had been arrested on that same chilly day with Jacob Ngarivhume, a political activist who had called for a peaceful protest against corruption.

We were both charged with inciting violence as I had endorsed his march as the Zimbabwean constitution allows citizens to protest peacefully – something that President Emmerson Mnangagwa’s government often thwarts.

Whilst at Harare Central Remand Prison, we received a visit from Zimbabwe’s main opposition leader, Nelson Chamisa, which we were told upset the president’s office.

So the next day, we were bundled into a truck and sent to the notorious Chikurubi Maximum Security Prison, where the convicted criminals are kept in legs irons and handcuffs if they move from their cell section.

I shared a cell, meant to house 16 inmates, with 44 other prisoners. There was no space to turn whilst sleeping, and this is in the middle of a Covid-19 pandemic.

The prisoners had no masks at all, and there was no running water or soap in the cells, where we were locked up for 17 hours a day.

With only one light bulb, it was impossible to read.

During the day we were in a courtyard, where 500 inmates shared only two toilets. Again there was no running water.

Many of the convicts suffered with pellagra because of the poor diet – symptoms include dermatitis and diarrhoea.

I fell ill in the last week of August with a terrible fever – the prison hospital didn’t even have a paracetamol to help relieve the pain.

When my doctor came to the prison, the hospital didn’t have a blood pressure machine for him to use.

Most of the prisoners have turned to religion – and it was difficult to get any sleep because of their loud praying, it is their only source of hope.

Some of them are there for crimes they have committed, there are also those inside for their political activism, some convicted despite no evidence.

I protested to the warders about the conditions – we got three more light bulbs, and some masks – some prisoners were given coronavirus tests. 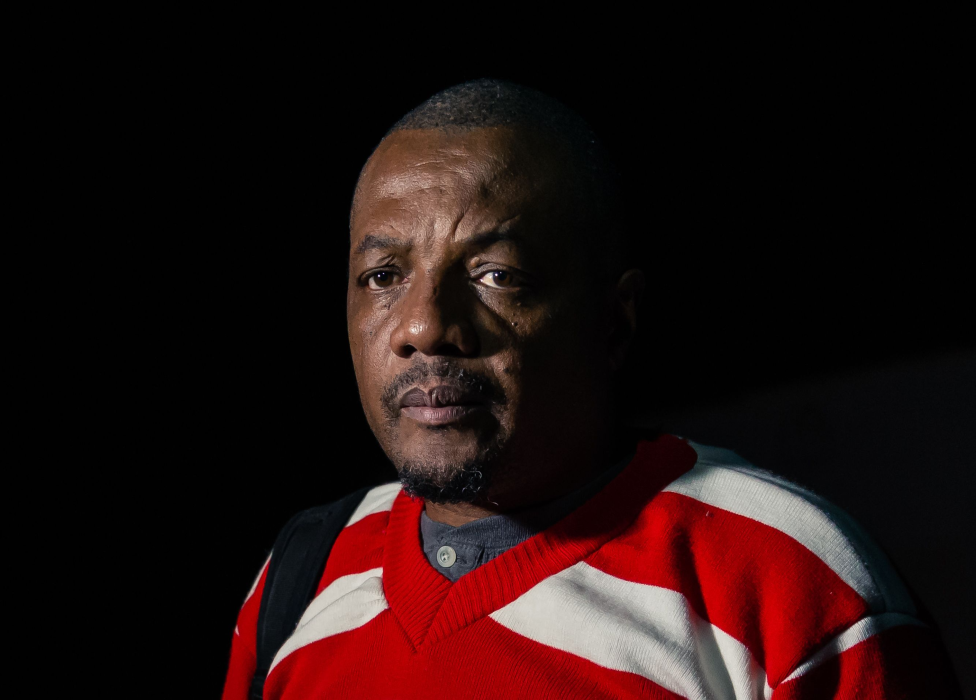 AFP Most of the prisoners have turned to religion – and it was difficult to get any sleep because of their loud praying, it is their only source of hope” Hopewell Chin’ono
Journalist

My cell mates were grateful. After I was granted bail on 2 September, I teared up when a couple of them turned to me before I left and said: “Please don’t forget about us.”

I felt my fight against corruption was vindicated.

I had been writing about the alleged looting of public funds and at Chikurubi I had seen how an institution had been starved of investment.

My ordeal is also a reflection of the difficulties faced by investigative journalists in Zimbabwe.

Three years since Robert Mugabe was ousted, abductions of perceived critics of the authorities have become more common.

That is not to say there was no intimidation under Mugabe, but I was still able to report on stories without arrest, including an award-winning documentary about the 2008 post-poll violence.

At the time I was taken into custody a government spokesman said no profession was above the law, yet I feel the intention of my arrest was to instil fear in journalists – and it seems to be succeeding.

Recently I met a few young journalists who said they had important information they were sitting on. Their reason for failing to report it? “We are too afraid,” they said.

Hopewell Chin’ono is a Zimbabwean journalist