HARARE, Zimbabwe — For years, the eventual death of Robert Mugabe, the leader who held Zimbabwe in his grip for decades after its independence in 1980, had obsessed his countrymen.

As he pushed into his 90s — growing visibly frailer by the week, stumbling ever more frequently at public events, his once eloquent speech becoming sluggish — people wondered, with a mixture of dread and hope, when “the old man” would be gone.

But on a warm summer morning in Harare on Friday, as Zimbabweans woke up to the news that their former leader had died at a hospital in Singapore, the reaction was muted. Many in the center of the capital saw his death through the prism of their difficult daily lives — not through the lens of history that Mr. Mugabe’s fellow African leaders emphasized.

“I’m sad that Mugabe has died with the economy,” said Agnes Humure, 37, a shopkeeper rushing to work in Harare’s central business district. “I personally don’t know who is going to wake it up again”

[New York Times obituary of Robert Mugabe, who as leader of independent Zimbabwe traded the mantle of liberator for the armor of a tyrant.] 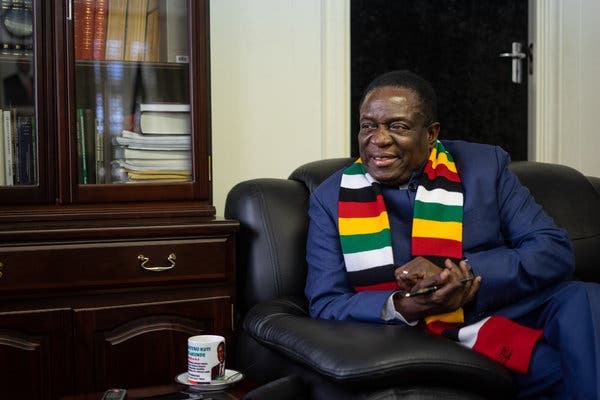 The reaction was subdued in part because the once supremely powerful Mr. Mugabe had become increasingly irrelevant in the two years since he was expelled from power. Outmaneuvered by his successor and onetime right-hand man, Emmerson Mnangagwa, and growing rapidly weaker, Mr. Mugabe had been reduced to a ghostly presence in the country that his personality had dominated for nearly four decades.

“Mugabe’s death has come at a time we have moved on without him,” said Richmond Dhamara, a 42-year-old street fruit vendor. “I don’t think he will be missed that much, because he is the same guy with the people who succeeded him — cruel.”

Mr. Mugabe’s reputation was sturdier elsewhere in Africa. Even after the worst excesses of his long rule, Mr. Mugabe drew standing ovations at African gatherings, where fellow leaders praised him as the last of the great liberation leaders.

“Words cannot convey the magnitude of the loss as former President Mugabe was an elder statesman, a freedom fighter and a Pan-Africanist who played a major role in shaping the interests of the African continent,” President Uhuru Kenyatta of Kenya said on Friday.

In central Harare, where the presidency and other branches of government are located, Friday felt like a regular morning. People scrambled to work in dilapidated taxi minivans from the suburbs. Street hawkers were setting up their wares on sidewalks as part of the thriving informal economy that has replaced the collapsing formal sector.

No soldiers could be seen in the area, only the usual police officers — a clear sign that the Zimbabwean government did not regard Mr. Mugabe’s death as a political or security risk. 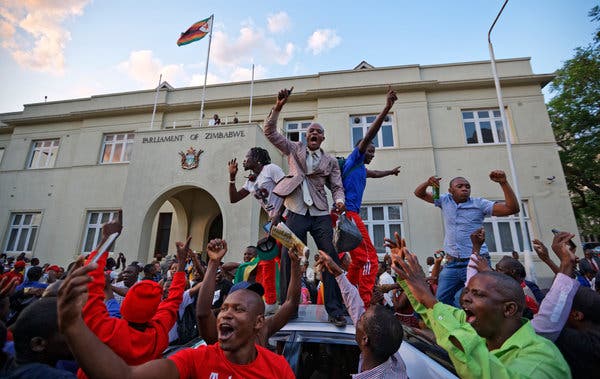 For most Zimbabweans, their emotions had reached a peak with Mr. Mugabe’s political death nearly two years ago. Countless people celebrated in Harare and across the country at the time, in a short-lived euphoria that faded with the ever worsening economy and disappointment over Mr. Mnangagwa’s tightfisted rule.

In many ways, Mr. Mugabe’s actual death was anticlimactic.

“I wish Mugabe should just have died in power, because things as they are now are much worse than before he was removed,” Jeremiah Gumbi, a 26-year-old money changer, said at his usual workplace in central Harare.

Even a supporter of ZANU-PF, Mr. Mugabe’s political party, on his way to party headquarters — where the national flag was flying at half-staff — was far from effusive in his comments.

“Old Bob is our hero,” said the party supporter, Tinago Mhanga, 38. “Although he messed up the economy, he is the father of the nation, even in death.”

Mr. Mugabe had spent the last two years mostly in quiet isolation after being deposed in a coup in November 2017. For a time, he was effectively put under house arrest with his family in his mansion in a leafy Harare neighborhood. He was regularly allowed to fly to Singapore, where he had sought medical treatment for years.

But an uneasy and unspoken tension persisted between Mr. Mugabe and Mr. Mnangagwa, the eternal right-hand man who had ultimately turned on his patron. For Mr. Mnangagwa, dealing with his predecessor was a delicate issue because of their long ties and shared political party. Mr. Mnangagwa generally treated the elder politician generously, hoping that Mr. Mugabe would support him, or at least stay quiet. 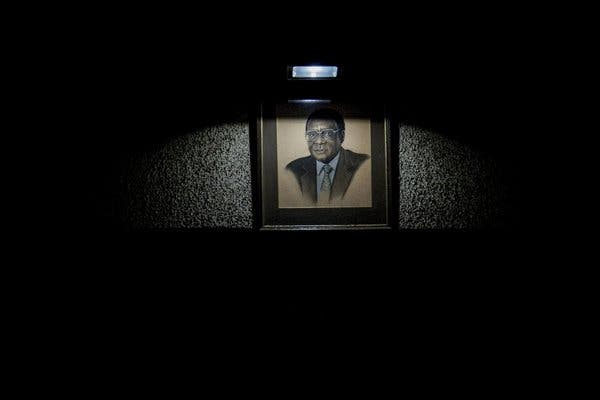 Mr. Mugabe — as wily in retirement as he had been during his nearly four decades in power — remained strategically quiet. But whenever he felt that Mr. Mnangagwa was not treating him with the respect that he was due, Mr. Mugabe made it known.

At least once, his allies summoned foreign journalists based in nearby Johannesburg for a meeting inside his Harare home. His wife, Grace, helped the journalists slip into the house, past soldiers under orders to prevent Mr. Mugabe from talking to the news media.

Most significantly, during elections in July last year, Mr. Mugabe publicly expressed his admiration for the opposition candidate, Nelson Chamisa, the leader of ZANU-PF’s fiercest and historic rival, the Movement for Democratic Change.

But despite the hopes and prodding of his wife, Grace, and other allies now fallen out of favor, including the former information minister, Jonathan Moyo, Mr. Mugabe had become a political nonentity.

Little was heard from him in the past year as he grew frailer and frailer. Instead, his sons — famous partygoers whose public misbehavior forced their parents to move them from Dubai to Johannesburg in recent years — continued to make headlines.

What will become of his wife, Grace, is unclear. Mr. Mugabe’s second wife, she is reviled inside Zimbabwe and, more important, inside the ruling party. Many of Mr. Mugabe’s longtime allies blamed her for her husband’s political excesses in recent years and for associating a once famously parsimonious man with the kind of luxury shopping and traveling that she enjoys.

In the year or so before her husband fell from power, Ms. Mugabe had sought to position herself as his successor and sideline Mr. Mnangagwa. That ultimately triggered the coup. Now, with her husband gone, Ms. Mugabe has little or no protection left in Zimbabwe.

Jeffrey Moyo reported from Harare, and Norimitsu Onishi from Paris